The Wilson Art Gallery hosts "AntARTica: Exploring Art and Science at the Bottom of the World," an exhibition featuring Laura Von Rosk's oil paintings of her interpretations of the Antarctic vista, Sam Bowser's watercolors of the jewel-like forams, along with specimens and artifacts. Video work from two other team members, documentary filmmaker Hilary Hudson and musician and producer Henry Kaiser, will also be displayed.

On Friday, January 23, from 3 - 4 p.m., there will be an artist presentation and lecture on the science and art featured in the exhibit. Following the lecture, from 4 - 6 p.m., there will be an opening reception for the exhibit of work by artists Laura Von Rosk, Sam Bowser, Hilary Hudson and Henry Kaiser. The artist presentation and lecture, as well as the reception, are free and will take place in the Wilson Art Gallery, located in the Noreen Reale Falcone Library on the Le Moyne campus. 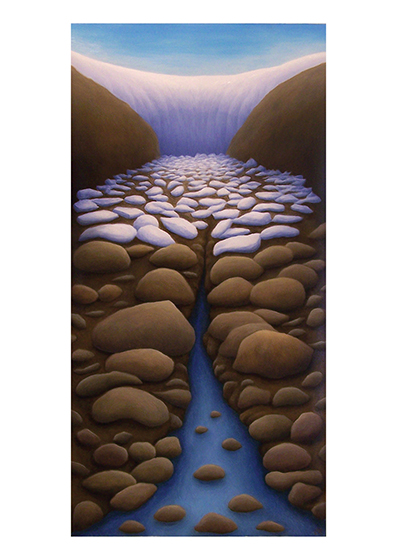 Dr. Sam Bowser is a polar biologist and art/science enthusiast. His research has shown that shallow Antarctic waters are densely populated with forams that evolved hundreds of millions of years ago. These Antarctic species are well within the reach of scuba divers - a fact that has taken him to McMurdo Sound 20 times where he has logged over 180 dives under ice-covered waters. He appeared in Werner Herzog's 2007 documentary film, "Encounters at the End of the World."

Painter Laura Von Rosk travelled to Antarctica in the fall of 2011 to work with Dr. Bowser and his research team. She was there to assist with the scientific research, tend dives, and in one way or another, incorporate this experience into her own work as a visual artist. Von Rosk is well known for her small surreal paintings of expansive landscapes. By recombining, emphasizing, manipulating, or inventing elements of the landscape she explores the tension between natural forms and memory. She will show images from a series of recent paintings depicting her interpretation of the Antarctic landscape.

Hilary Hudson is a freelance filmmaker with an academic background in comparative physiology. With a particular passion for the the oceans and poles, Hilary has spent significant time in Antarctica and has logged nearly a years worth of sea time aboard tall ships and research vessels.

In 2001, Henry Kaiser spent two and a half months in Antarctica on a National Science Foundation Antarctic Artists and Writers Program grant. He has subsequently returned for nine more deployments to work as a research diver. Kaiser has appeared on more than 250 albums and scored dozens of TV shows and films, including Herzog's "Encounters at the End of the World", which he produced and scored, and which features his underwater camerawork.