The Wilson Art Gallery, located in the Noreen Reale Falcone Library at Le Moyne College, will sponsor an exhibition of work by Matthew Litteken, titled “Render Unto Caesar: A Discourse in Value Conquest for the 21st Century,” from January 27 to February 24. The exhibit, consisting of original paintings, drawings and mixed-media collage, can be seen during regular library hours. 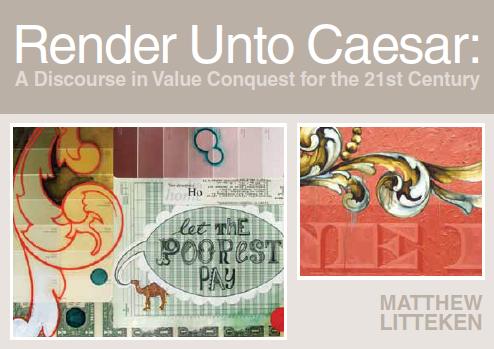 An opening reception will be held in the Wilson Art Gallery on Friday, Jan. 27, from 4 - 6 p.m. The event is free and open to the public.

From the artist’s statement:

As a tangible item, currency is one of the most ephemeral things in the external, practical world, constantly defined and redefined in relationship to its fluctuating value. Money has become such an integral part of our consumer-based existence that the motif of currency is commonly used as a symbol of value or purchasing power. We are bombarded with its imagery, especially within televised advertising, printed coupons and journalistic illustrations. Even with the rising technological substitutes for money, paper currency – actual, physical money – is still plainly capable of evoking delight and mystification. It is this mystification with value and money with which I am concerned in my work. Since value and its correlation to money are so transient, I am interested in questions such as: What do we value? Why? By what standards do we assign value? This question is particularly apt in light of the popular and easily-accessible means to purchase “manufactured” art and décor in such venues as the “big box” merchandise chains. My work investigates this aspect of consumerism through the exploitation of currency and value in a two-fold series of introspective paintings. The two projects, completed in tandem with one another, call for the personal inventory of spending practices and value assignments, predominantly in relation to art as commodity.