Le Moyne College will host an exhibit of fiber arts and quilts by Caroline Tauxe in the Wilson Art Gallery, located in the Noreen Reale Falcone Library. The exhibit, titled “Women’s Wealth,” opens on Thursday, Feb. 28, and will run through Wednesday, March 27, and can be seen during regular library hours. The exhibit is part of Women’s History Month. 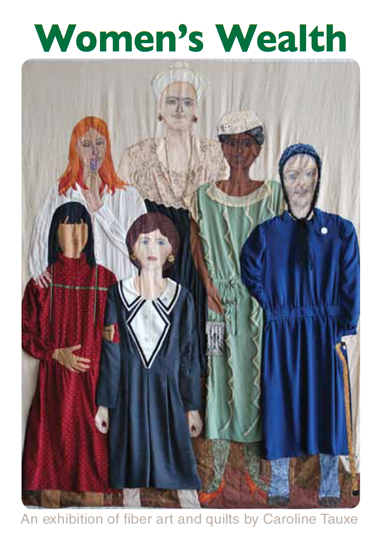 There will be an opening event on Thursday, Feb. 28, beginning at 3:30 p.m. in the Bernat Special Events Room, located in the library. Vanessa Johnson, a historian and Griot (a storyteller in the West African tradition, will perform “Foot on the Serpent,” a first-time telling of women-centered stories that transcend time and geography. Following her performance, there will be an opening reception in the Wilson Art Gallery from 4:30 – 6 p.m. Both events are free and open to the public. For more information, call (315) 445-4153.

Caroline S. Tauxe received a bachelor’s degree in anthropology from Yale University and a doctorate in anthropology from the University of California at Berkeley. Her dissertation research concerned power, conflict and social change in rural North Dakota communities undergoing coal-based energy development. It was a pioneering work in what has since become the field of political ecology in environmental studies. Tauxe later conducted research in Brazil on middle-class life during hyper-inflation, and especially the challenges it posed to class identity and the morality of exchange. Tauxe currently teaches at Le Moyne College and is active in community arts development.

From her artist statement:

Quilting is an art form traditionally associated with women in the U.S., particularly housewives with a need to stretch household resources by re-using fabric, and for whom there was no time to pursue non-functional art. In the North and Middle West, it was an important vehicle for feminine sociality and solidarity, as women got together to create group quilts and to share the tedious work of the quilting itself. (“Quilting” refers literally to the stitching together of multiple layers of fabric.) In the Deep South, quilt-making was more of a solitary artistic activity, though there is a long tradition of displaying the results at regional folk-music gatherings. In the U.S. homemade quilts have traditionally been a women's valuable, typically passed on through the female line as treasured heirlooms. Most contemporary art quilters are also women, and the genre is becoming less bound by traditional forms and techniques. More explicitly than ever before, quilts have become a medium for personal expression of what is important in women's lives, and a form of story-telling. Genres such as divorce quilts and grief quilts commemorate significant life events, and practitioners regard the process of creating them as therapeutic. Over recent generations, American women have come to take a more empowered part in the world beyond the domestic sphere. The expansion of women's worlds is reflected in this show.

As a fiber artist my involvement with this women’s art form spans the range from folk to fine, and from the personal to the global. I began in the southern folk art tradition. My grandmother taught me hand sewing, embroidery and tatting (a simple kind of lacemaking) as a small child and I grew up around older women who were always working on a quilting project of some kind. Examples of their work are among my own most cherished possessions. Like them I create quilts not as commodities to sell but as artistic expressions, gifts, and functional equipment. And yet, just as my life has expanded far beyond the geographic and experiential limits experienced by those women, I have freely stretched the envelope, reinterpreting traditional patterns; introducing other media and techniques; and creating works in the styles of illustration, story quilts, and art quilting. Mine is a contemporary woman’s experience of life, and my work includes expressions of grief, the long wait of pregnancy, love for a child, as well as accompaniments to professional achievements and responses to world events.

The title “Women’s Wealth” signifies on several levels: a rich women’s tradition, production of precious matrilineal heirlooms, and of valuable artworks by women, reflective of their perspectives and life experiences. I am an anthropologist by profession, and my research concerns the cultural meaning of money and the collective illusion of its value. This interest seeps into the works as well, some of which include the medium of paper currency.