The conservation of this painting was made possible by the NYSCA/GHHN Conservation Treatment Grant Program administered by Greater Hudson Heritage Network with public funds from the New York State Council on the Arts.

The Story of This Painting

When the College was renovating Grewen Hall in the area near the Dolphin Den's stairs and elevator about ten years ago two damaged, monumental-size oil paintings were found in a wall partition. Jacqueline Belfort-Chalat, professor emeritus and founding chair of fine arts, identified one as from the Orientalist movement and worthy of investigation and restoration. The paintings were stored in the library until 2018 when the new director of the library transported the Orientalist landscape painting to West Lake Conservators in Skaneateles, NY for an evaluation--a necessary step before applying for a grant.  It was this same firm when it was treating the library's rare civil war photographic album in 2013 that made the library director aware of a grant program for small institutions--NYSCA/Greater Hudson Heritage Network's Conservation Treatment Grant Program. The agency responded positively and awarded Le Moyne College its highest grant amount of $7,500 in September 2019. West Lake Conservators began the painstaking work soon after and the painting returned to the Library in February 2020.

Read on further down the page about Orientalism and its origins and controversy not solely as a movement within the 19th & 20th centuries art world but more broadly across the disciplines of study as a way of "seeing" the Arab peoples and cultures as "different" than that of Europe and the United States.

View the stages of conservation 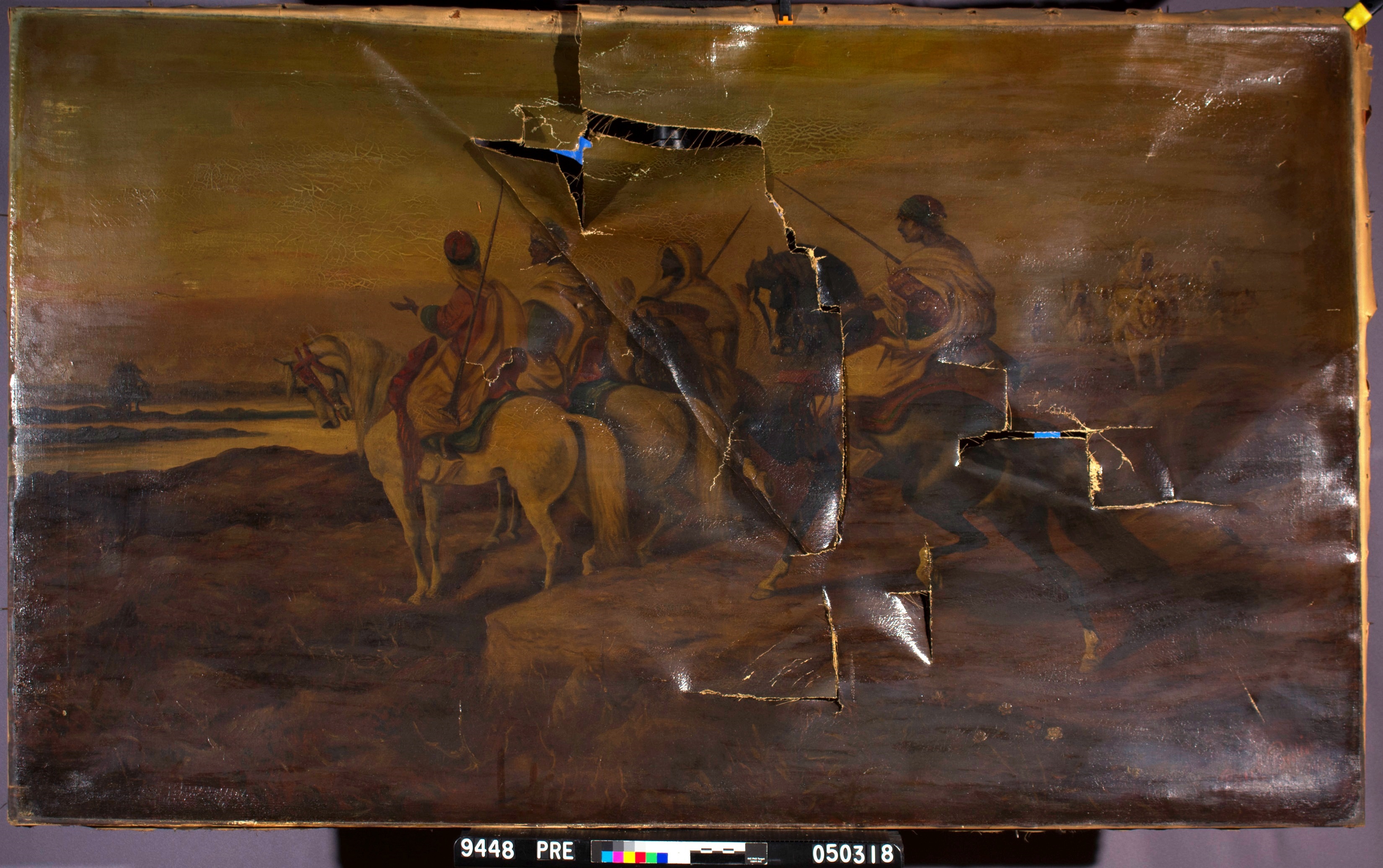 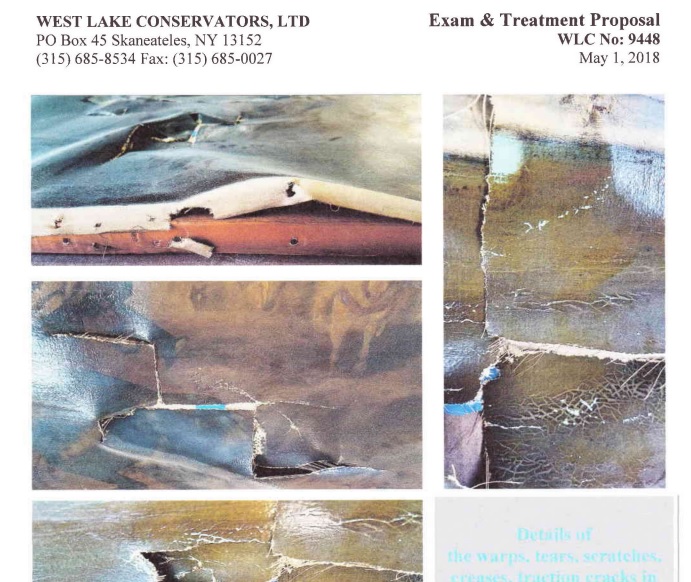 Pre-treatment view outside of frame 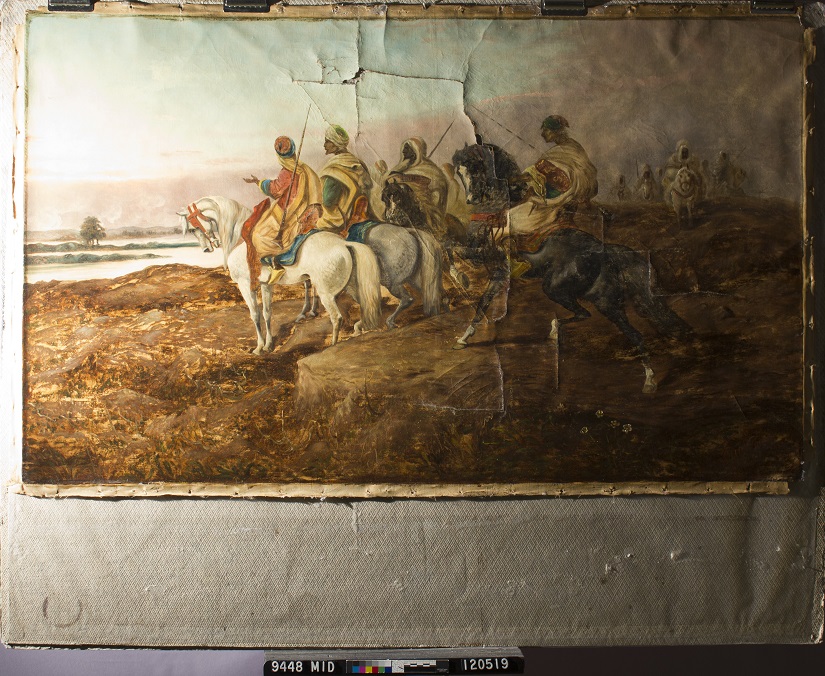 Artist signature difficult to determine even after the cleaning 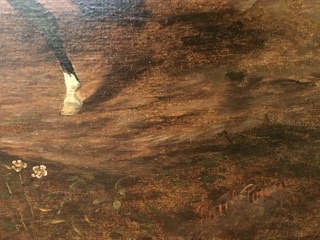 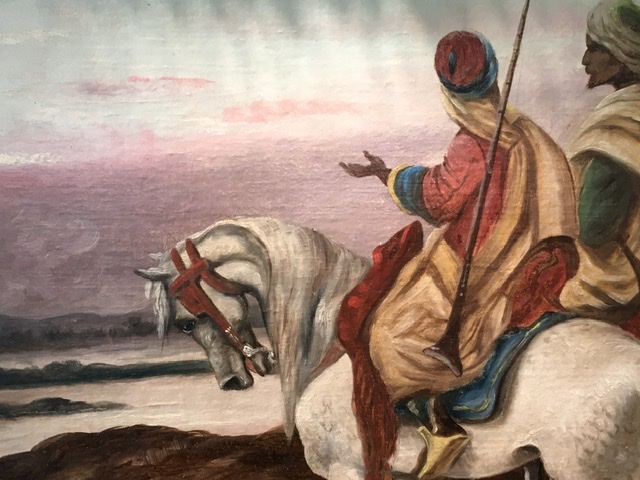 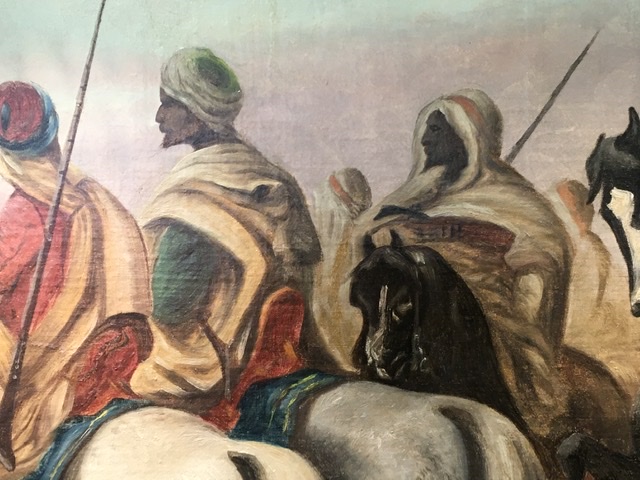 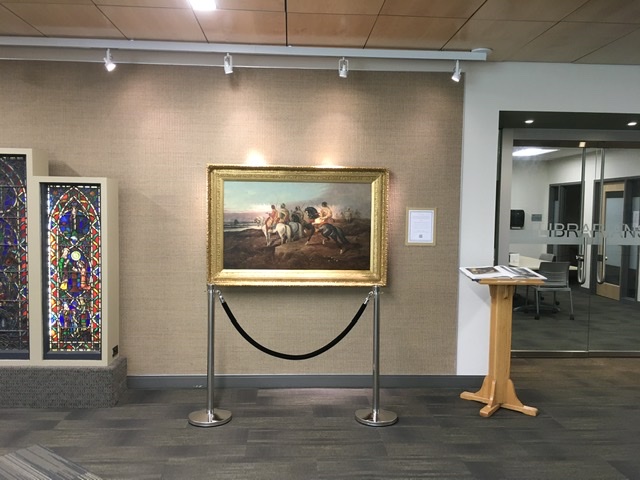 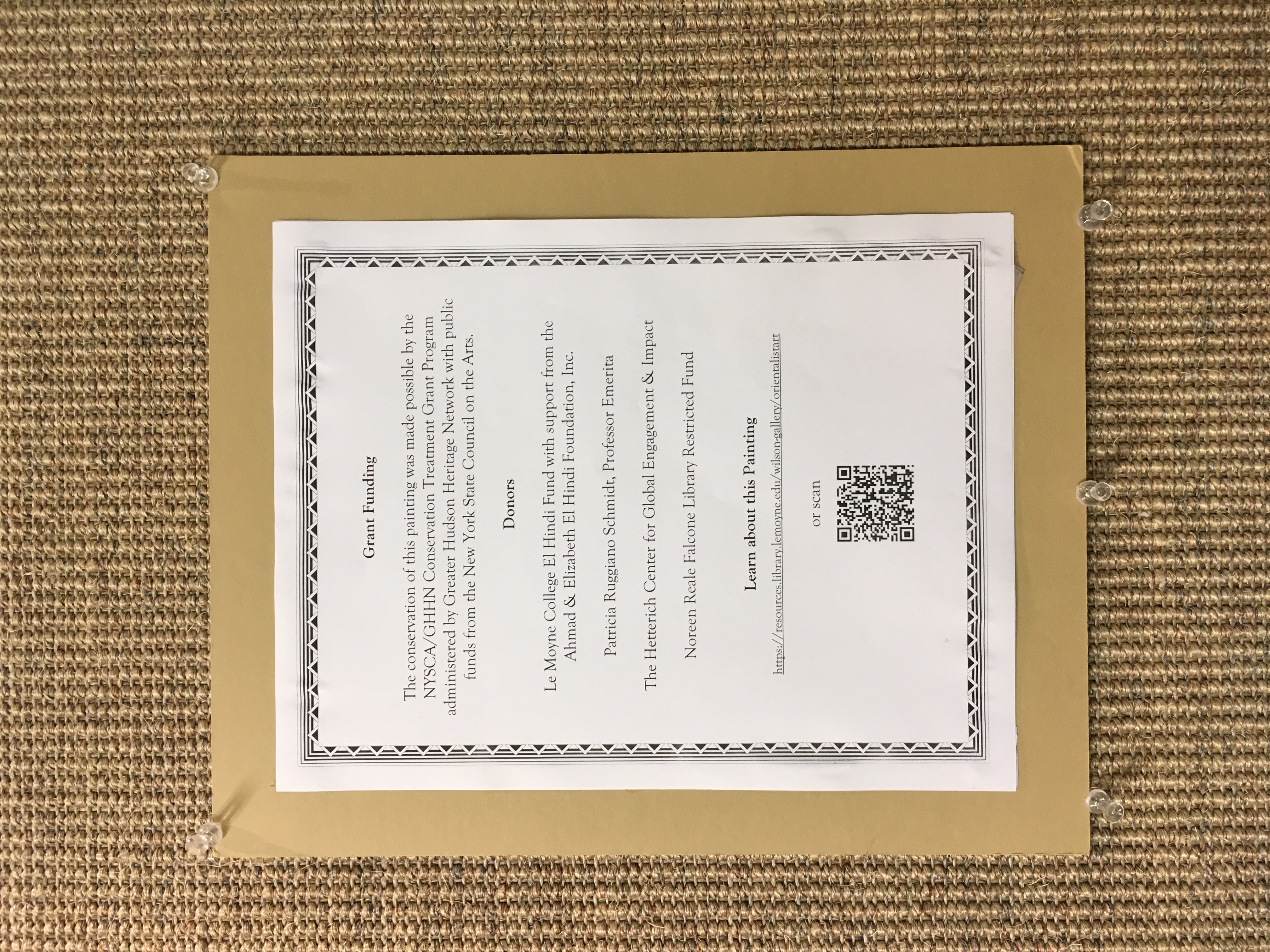 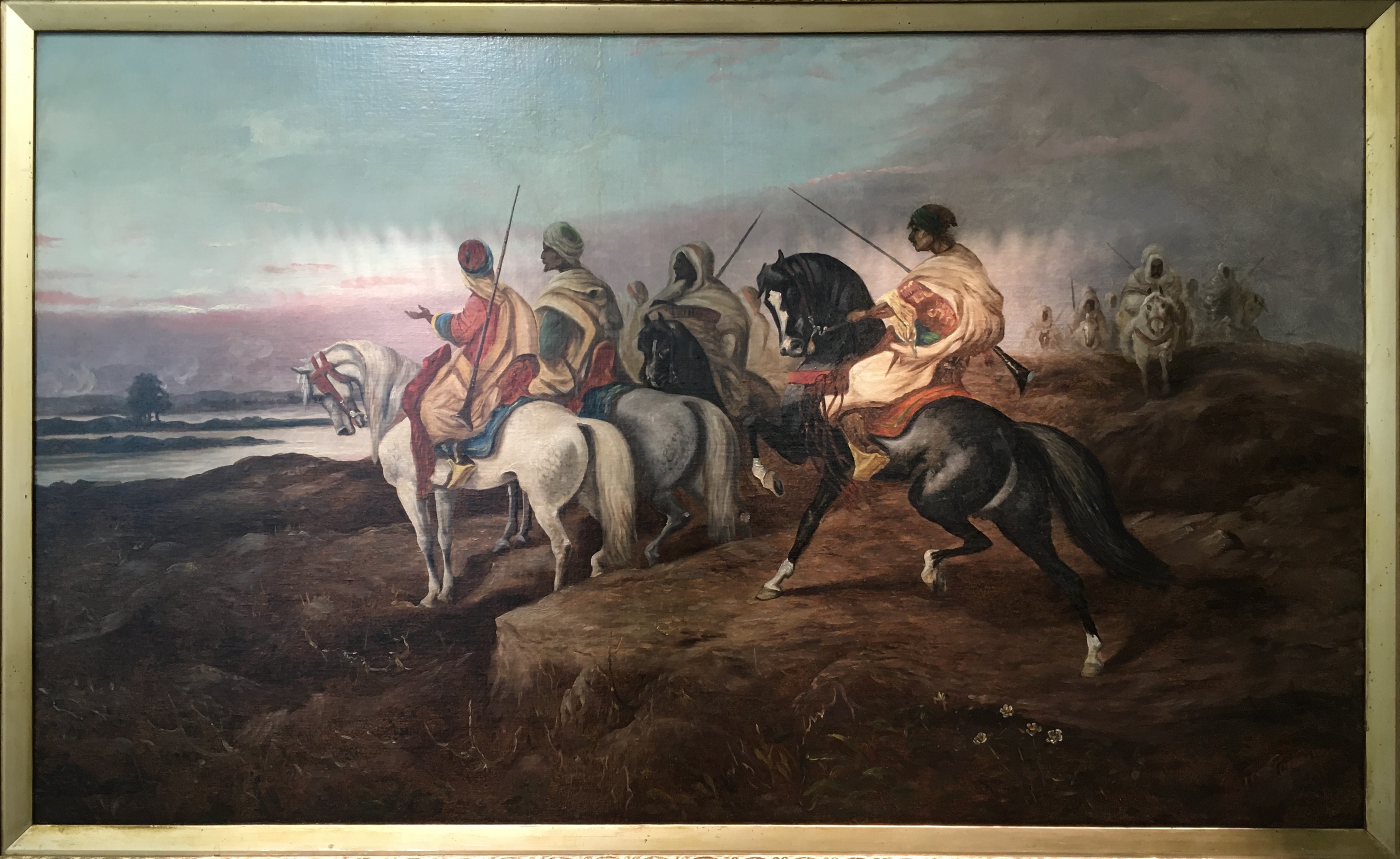 Orientalist Art is Western art depicting the lands and people of North Africa and Western Asia. Artists from Europe joined expeditions to these lands. These were first-hand encounters through difficult journeys requiring them to live there months at at time. Themes they tended to focus on were the landscapes and architecture, the harems, slaves, and marketplaces, and the Beduoins and soldiers. What part of this art movement within the Romantic period is enchantment?  What of it is stereotyping and frivolity? Did the artists see one culture, rather than the many that exist among the Levantine people?

Orientalism in art, literature, and cultural studies is fraught with controversy as a reflection of Western Europe's preconceived archetypes that insists all Arabo-Islamic peoples are alike.  At the heart of it are confrontations between rival European nations and the Ottoman Empire. Art historian Peltre notes the origins of it in Napoleon's 1798-1801 Egyptian campaign and spurred further by the relations between Europe and Muhammad Ali Pasha governor of Egypt 1805 to 1848, through the Russo-Turkish War (1877-78), effectively ending with a 1914 Tunisian trip by artists Macke and Klee. Peltre calls orientalism the "incremental unveiling of the Orient," in which art, literature, music, and architecture engaged these cultures, until the artists began to be denounced around 1980 by art historian Linda Nochlin as work by "half-blind witnesses to imperialist domination. (Peltre,17).

These artists left a massive visual portfolio of Western interpretation of the "East" and the "Orient." Art historians began to study their work in the early 1930s that was followed by a period of silence. Today academics ask, what do we learn and don't we learn from a Western" notion of the "East?"

The Orientalist artist as traveler, encountering another culture, engages us and calls us to fully examine Orientalist art in its full, complex history. This art should be studied with a full investigation of the entire period and post colonial studies.

In 2003 in his new preface to his 1979 book, Orientalism, Said notes that his book is "very much a book tied to the tumultuous dynamics of contempory history. I emphasize in it accordingly that neither the term Orient nor the concept of the West has any ontological stability; each is made up of human effort, partly affirmation, partly identification of the Other.  That these supreme fictions lend themselves easilty to manipulation and the organization of collective passion has never been more evident than in our time, when the mobilizations of fear, hatred, disgust, and resurgent self-ride and arrogance--much of it having to do with Islam and the Arabs on one side, "we" Westerners on the other--are very large-scale enterprises." (Said, 2004, xvii)

Edwards, Susan. "Rethinking Orientalism, Again." The Iris: Behind the Scenes at the Getty. 1 Sept 2010. Retrieved 3 March 2020 from https://blogs.getty.edu/iris/rethinking-orientalism-again/ Blog.

$7,500 from the Conservation Treatment Grant Program of the Greater Hudson Heritage Network in concert with the New York Council on the Arts

$3,800 from Library Restricted Fund $2,000 of which is a gift earmarked for this project from professor emerita Patricia Ruggiano Schmidt

$1,000 from the Le Moyne College Hetterich Center for Global Engagement & Impact through the generosity of F. Paul Hetterich, '84