Le Moyne's campus offers a rich array of original works of art that are educationally and personally enriching illustrating that creativity is one of the hallmarks of a Jesuit education. 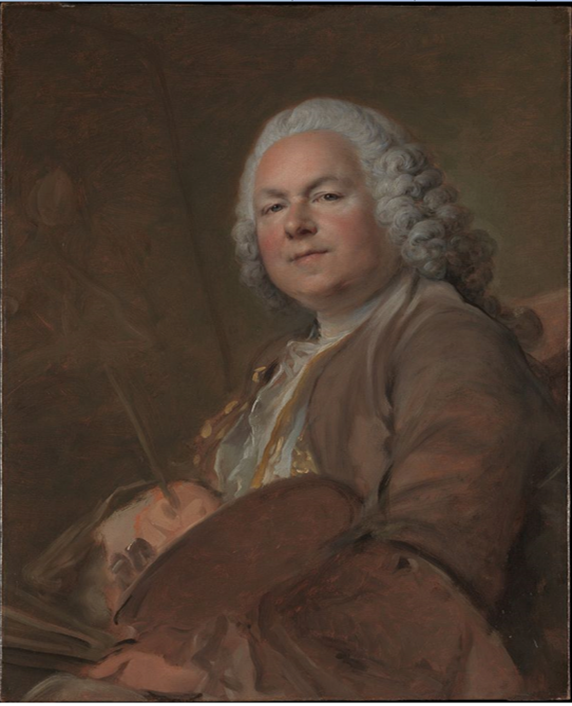 Dowager Queen of France, Marie de Medici, widow of Henry IV, commissioned Jean Paul Rubens to create a series of paintings depicting her life in 1621. Between 1622 and 1624, the Flemish artist Rubens decorated the galleries of Luxembourg Palace in Paris, now the seat of the French Senate of the First Republic, with 21 paintings that portrayed the events of Marie de Médicis. They are now exhibited in the Louvre.

Her grandson Louis XIV, commissioned Jean-Marc de Nattier to create drawings of Rubens’ paintings in 1704. Nattier, born in Paris on March 17, 1685, was the second son of Marc Nattier, a portrait painter, and Marie Courtois, a miniaturist. He was taught by his father and his uncle, Jean Jouvenet, a history painter. He enrolled in the Royal Academy in 1703 and, in 1715, went to Amsterdam, where he gained recognition for being a court painter, specifically for his portraits of Peter the Great of Russia and his czarina. Though he aspired to be a history painter like his uncle, the French financial crisis of 1720 forced him to continue in the lucrative portraiture business. He revived the allegorical portrait genre, in which living people are depicted as Greco-Roman gods, goddesses, or other mythological figures. He later, after the 1740s, returned to more straightforward portraits, serving as the official portraitist to the four daughters of Louis XV. Financial issues and poor health forced him to retire in 1762. He died in Paris on November 7, 1766.

The 1710 publication of these engravings, based on these drawings, made Nattier famous. The prints you see here are part of the series donated to Le Moyne College in 1982 by Nicholas Colella who acquired the 21 prints and their folio cover from the Eastman family of Rochester, New York. 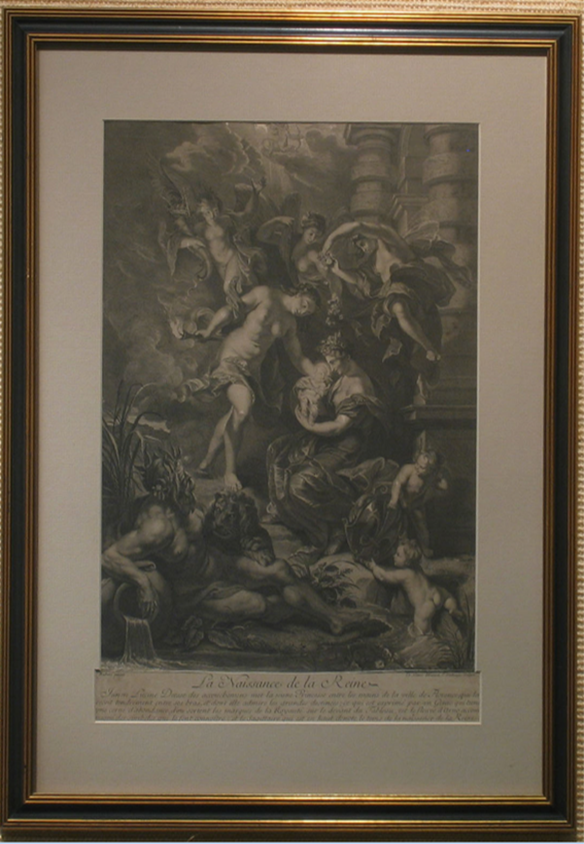 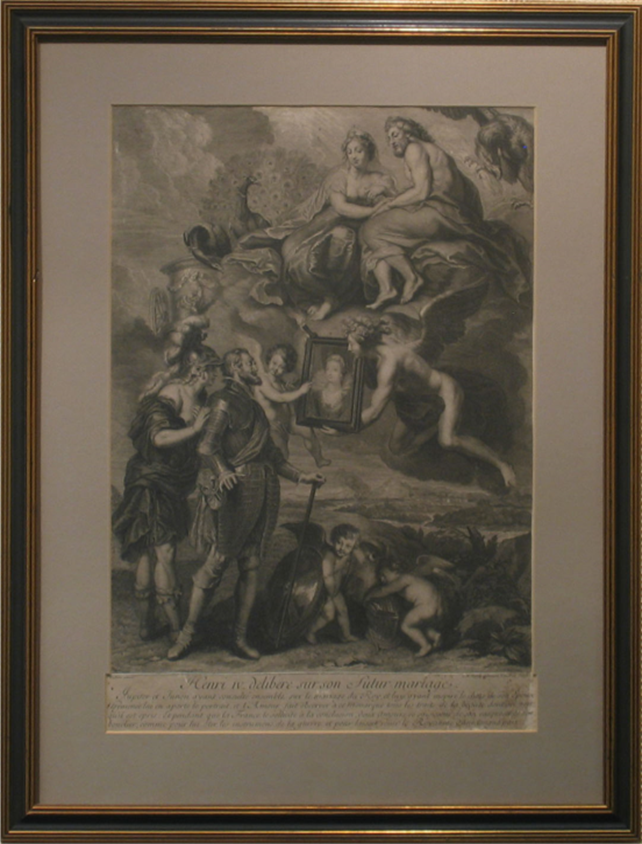 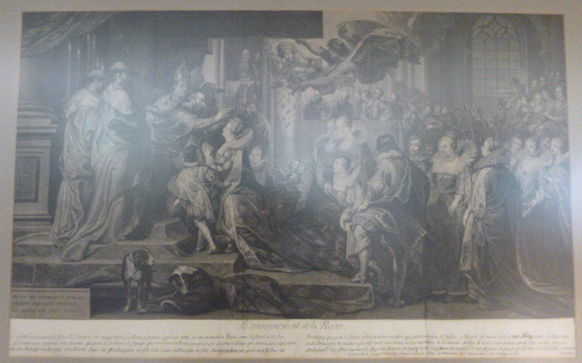 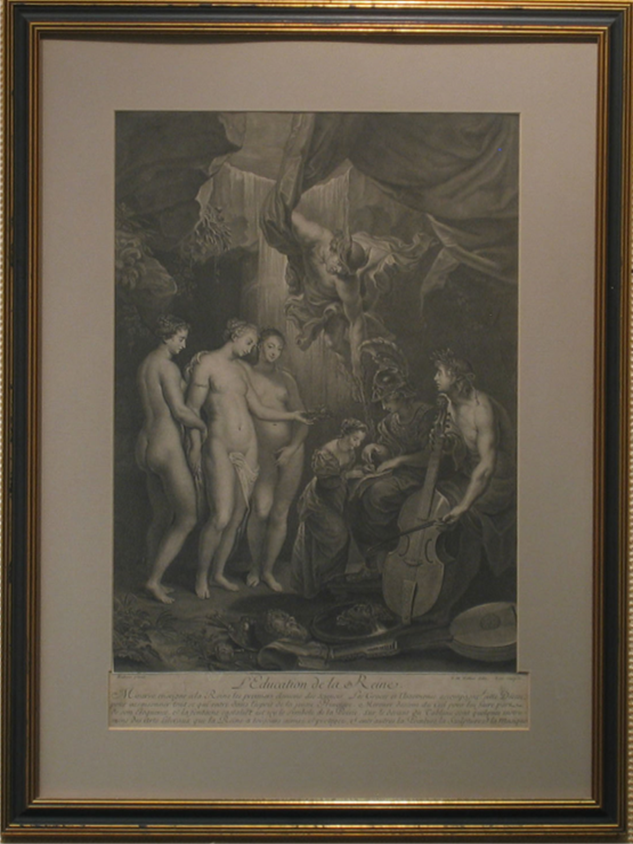 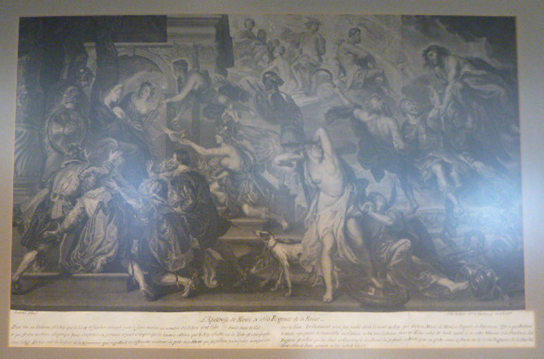 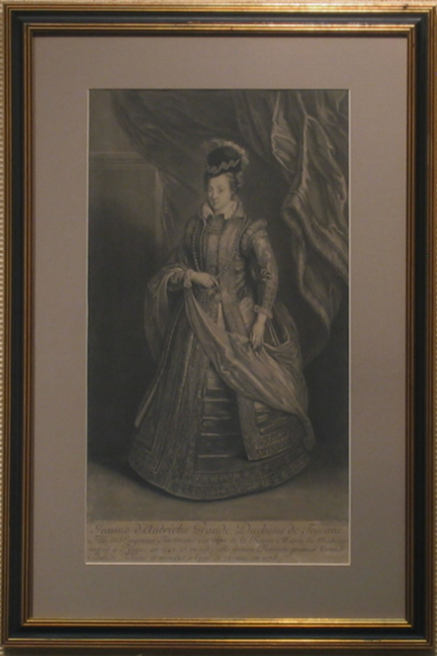 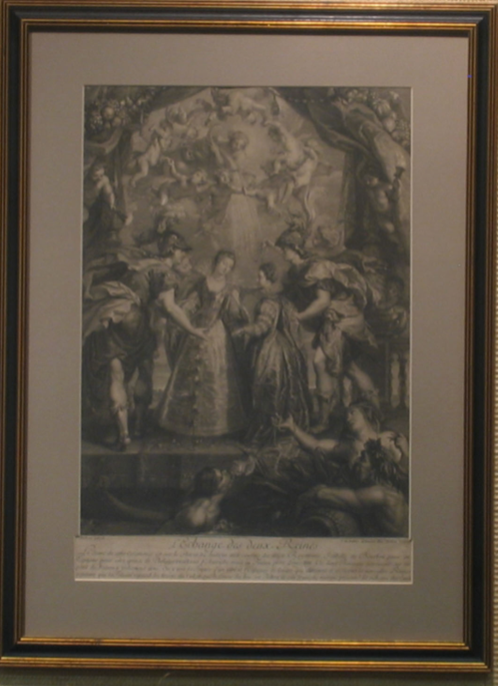 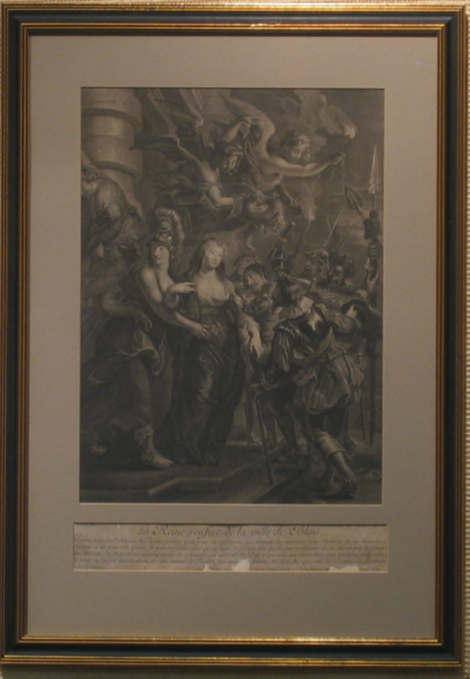 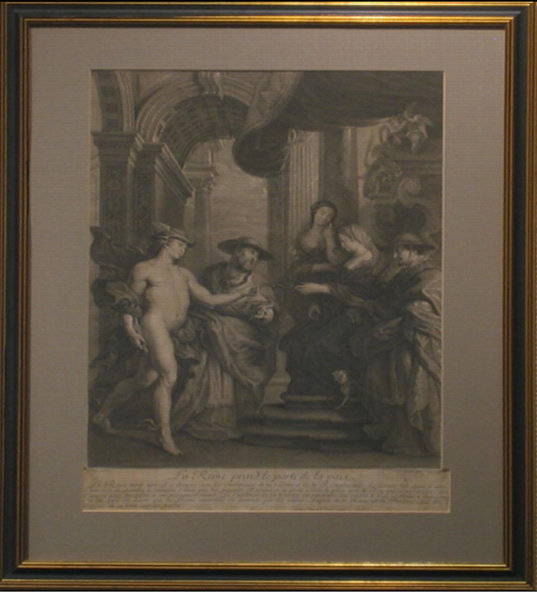 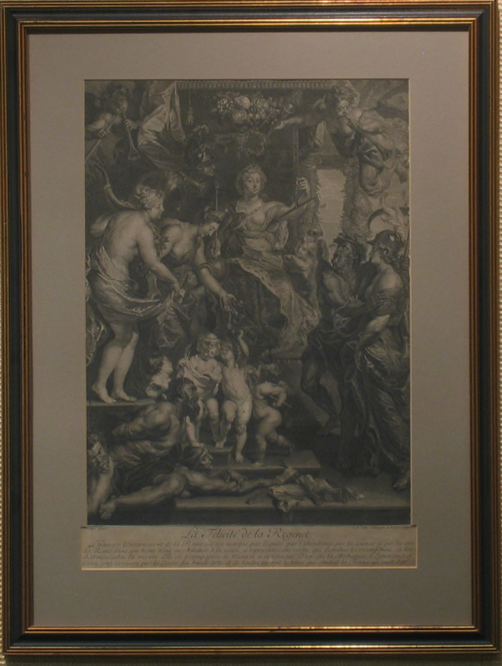 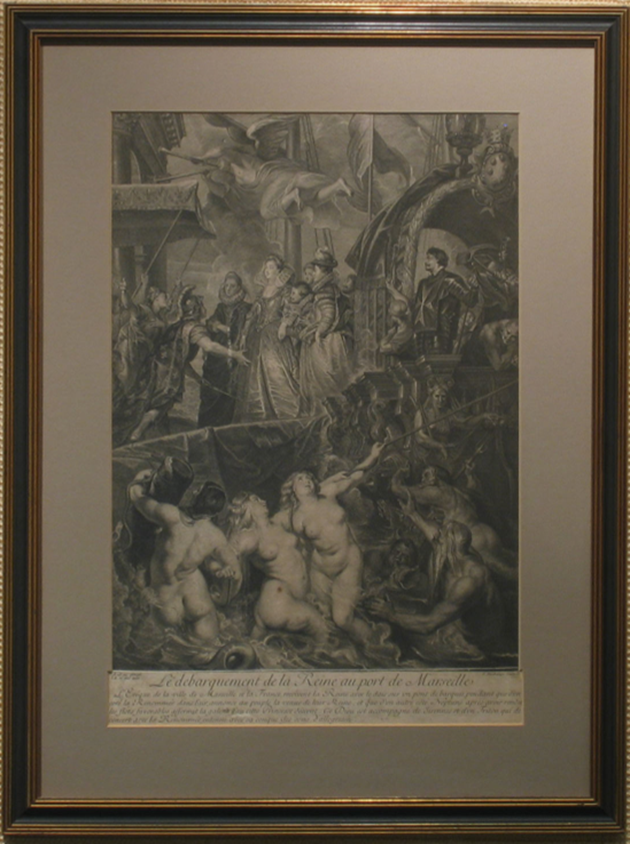 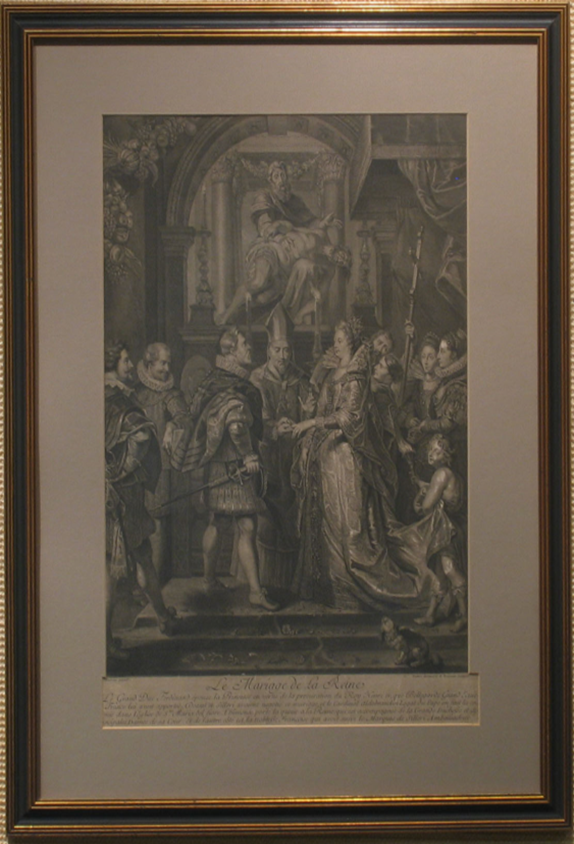 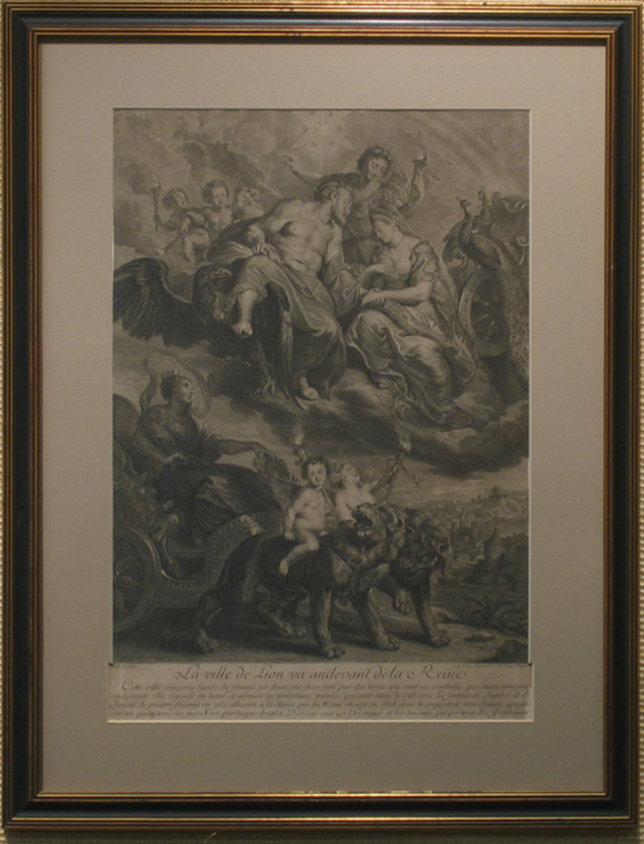 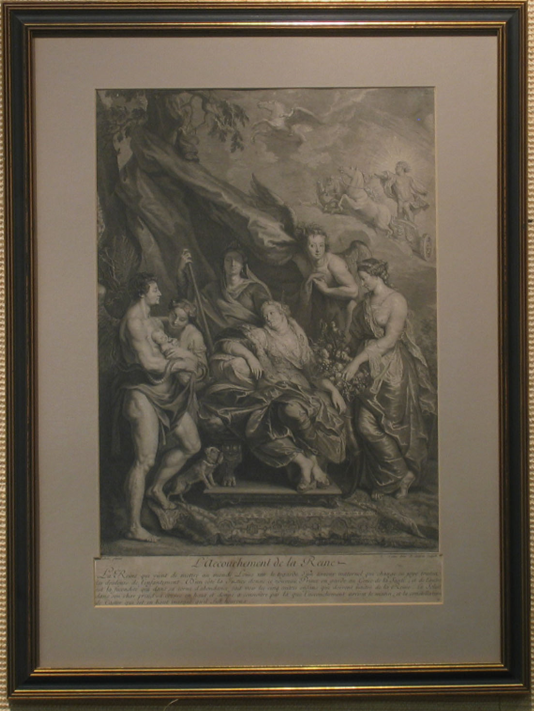 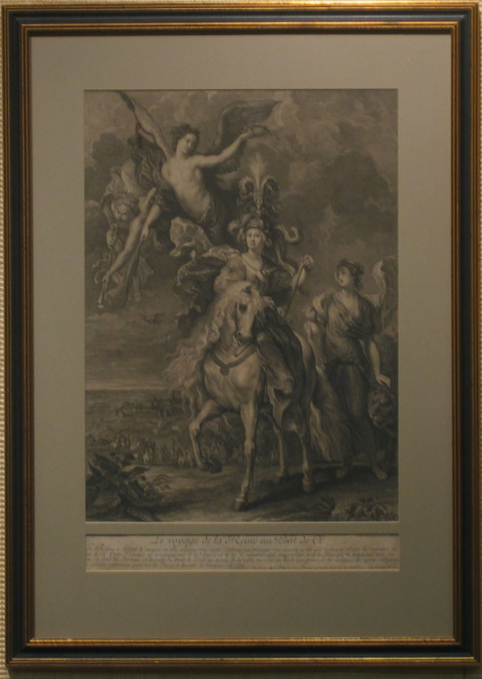 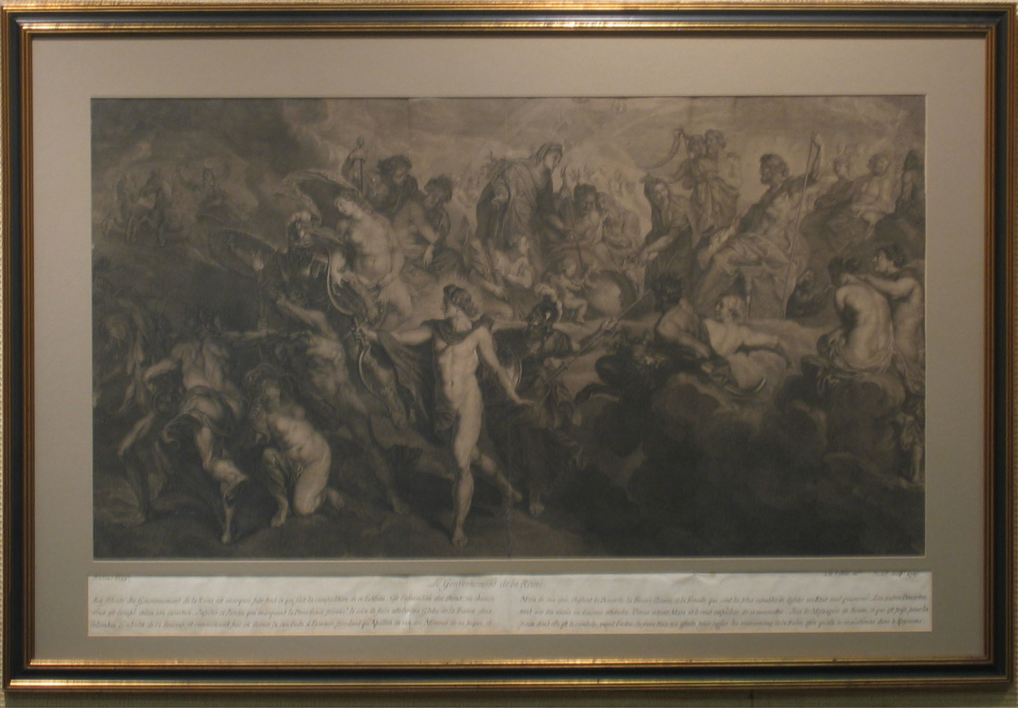 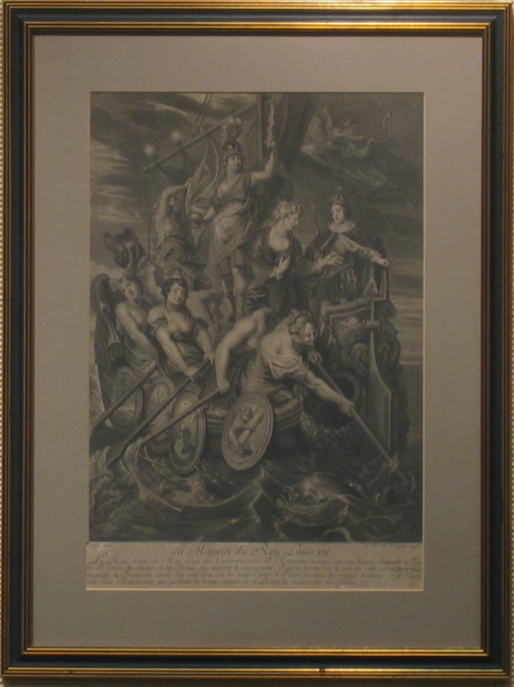 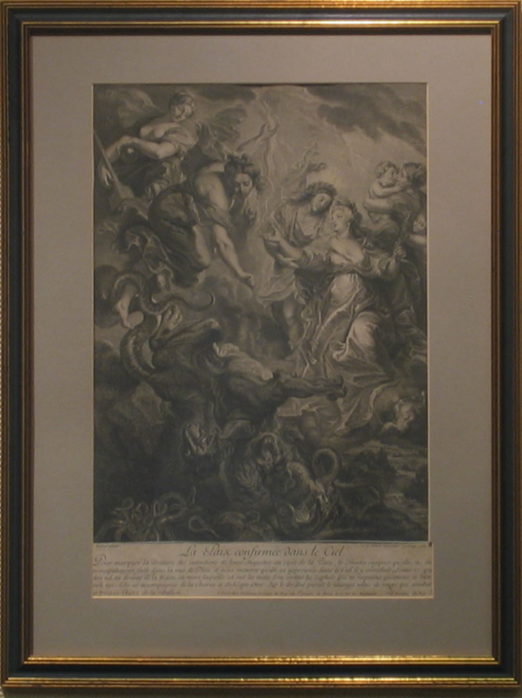 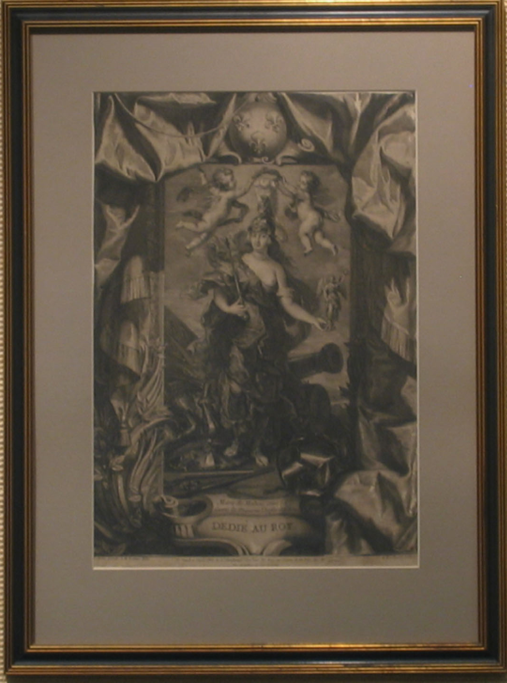 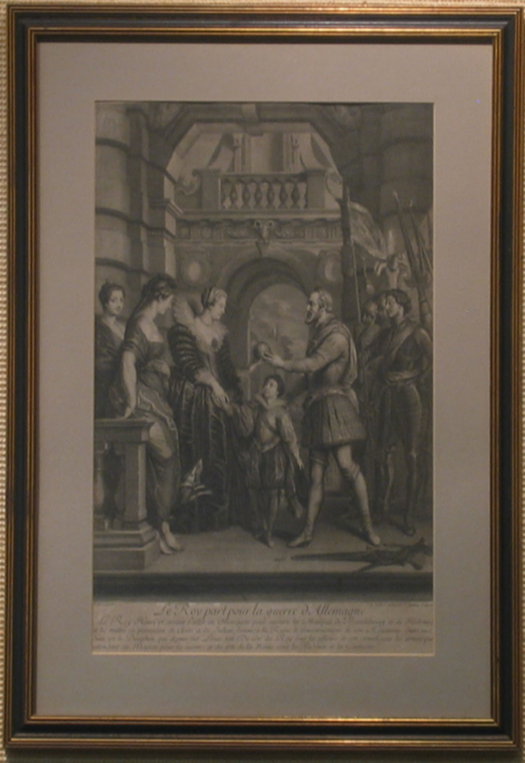 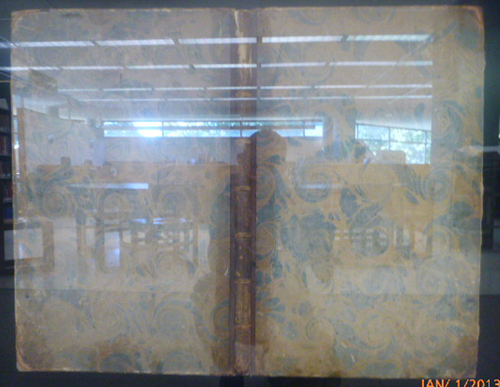 Marie de Médicis (1573-1642) was the daughter of Francesco de' Medici, grand duke of Tuscany, and Joanna of Austria. Shortly after King Henry IV of France divorced his wife, Margaret, he married Marie in October 1600.  In 1601 Marie gave birth to the dauphin Louis, the future King Louis XIII.  When Henry IV was assassinated, May 14, 1610, the Parlement of Paris proclaimed Marie regent for young King Louis XIII.  Although Louis XIII came of age to rule in September 1614, Marie continued to govern in his name. Eventually Marie lost power and was exiled to Blois.  Marie, assisted by her adviser Cardinal de Richelieu, twice attempted revolts against Louise XIII.  Through the intersession of Richelieu she was readmitted to the king’s council.  Marie eventually persuaded Louis XIII to make Richelieu his chief minister.  Marie and Richelieu fell out over France’s alliance with Protestant powers.  She demanded that Louis dismiss the minister, but Louis stood by Richelieu and exiled Marie.  She fled to Brussels in the Spanish Netherlands in July 1631 and died there eleven years later.

Marie de Médicis built the Luxembourg Palace in Paris, and in 1622-24 the Flemish artist Peter Paul Rubens decorated its galleries with 21 paintings, portraying the events of her life. Jean-Marc Nattier (1685-1766), a French Rococo painter noted for his portraits of the ladies of King Louis XV's court in classical mythological attire, made a series of drawings of these paintings. The publication in 1710 of engravings based on these drawings made Nattier famous.